The Sweden-headquartered equipment manufacturer claims that the model, which is equipped with electric drive systems and electromechanical linear actuators, is the world's first fully electric compact excavator. 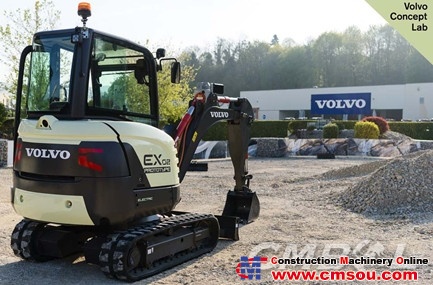 In place of a conventional combustion engine, the Volvo EX2 is powered by two lithium ion batteries, which deliver 38kWh of power. According to Volvo CE, the batteries provide eight hours of power for intense applications, such as the excavation of compact ground.

hcène Nedjimi, lead electronic engineer for the Volvo EX2 project, said: “The prototype machine delivers the same power and force as its conventional counterpart, as well as faster speeds in combined movements. This represents the future of our industry.”

Like the LX1 hybrid electric wheel loader, the EX2 entirely lacks a hydraulics system. Instead, the model's electric architecture uses electromechanical linear actuators to power its boom and tools.

In addition to delivering a zero-emissions machine, Volvo CE stated that the removal of a combustion engine and hydraulics mean the EX2 is 10 times as efficient, has 10 times lower noise levels, and significantly reduces the total cost of ownership (TCO) compared to its conventional counterparts.

The EX2 was unveiled at an event focusing on infrastructure and transport in cities of the future, as the machine’s low noise levels could prove particularly advantageous in the urban environment.

At present, the EX2 remains a proof of concept and Volvo has no stated plans or schedule for putting the machine to market. The next step in the development of the product will be its durability testing.

Volvo also continues to research how to outfit quarries completely with electric heavy equipment, and will be field testing the LX1 hybrid wheel loader and HX1 electric hauler through 2017 and 2018.